There are many benefits to bicycle commuting. It is all of the following things. 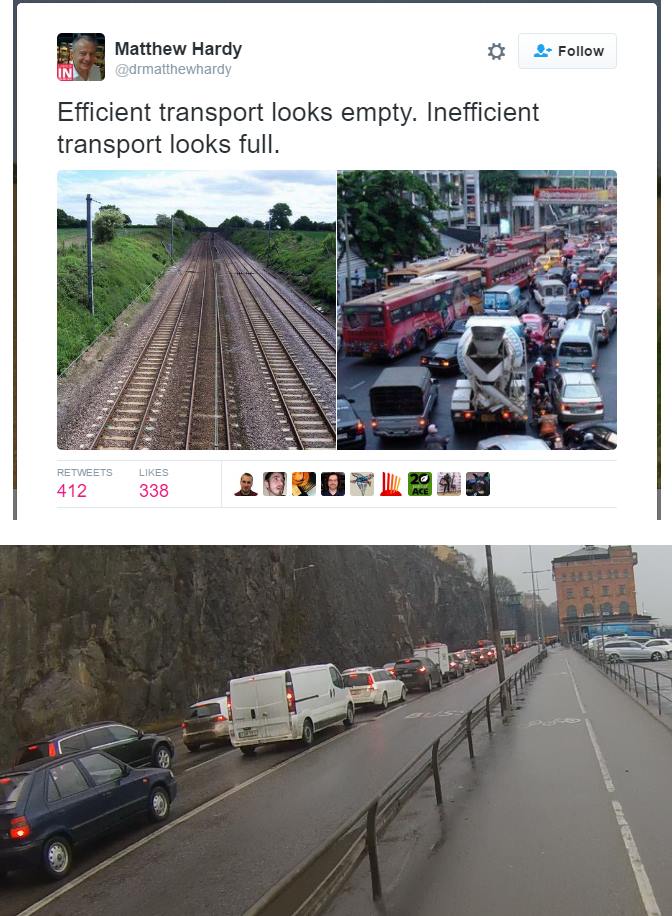 There are some interesting people who have praised the bicycle as a rational form of transport. For example, pioneering science fiction writer and author of The War of the Worlds, H.G. Wells, observed that,

Every time I see an adult on a bicycle, I no longer despair for the future of the human race.

Think of the person what you will, but Steve Jobs have reported,

I read a study that measured the efficiency of locomotion for various species on the planet. The condor used the least energy to move a kilometer. And, humans came in with a rather unimpressive showing, about a third of the way down the list. It was not too proud a showing for the crown of creation. So, that didn’t look so good. But, then somebody at Scientific American had the insight to test the efficiency of locomotion for a man on a bicycle. And, a man on a bicycle, a human on a bicycle, blew the condor away, completely off the top of the charts.

Bill Nye (the Science Guy) exaggerated a little, but he said jokingly that,

There's no machine known that is more efficient than a human on a bicycle. Bowl of oatmeal, 30 miles – you can't come close to that.

Of course, to actually ride 30 miles only on the bowl of oatmeal and not any energy reserves in your body, it has to be a pretty serious bowl of oatmeal. And I'm fairly sure in terms of raw efficiency, something like plants converting sunlight to sugar is more efficient. But for locomotion, the bicycle is hard to beat.

I don't appreciate that cyclists pick and choose which set of rules they want to follow. One second they act like a vehicle, and then when it doesn't go their way, they are suddenly a pedestrian. It bugs the shit out of me.

Okay, I'm kidding with that last one. It's true that cyclists are operating vehicles in the eye of the law, but cyclists also have a lot more to lose than a car driver in a collision between bicycle and car. That has to be respected by everyone in traffic.

Assuming you want to try this revolutionary, new two-wheeled technology out to go to places like your workplace, you need a bicycle. If you have an old bicycle lying around, you can probably use that one to get to where you're going. There's no need to get a new one just because.

The only thing you need to make sure is that your bicycle is safe and that you're comfortable with it. You don't want the chain to break or the wheel to pop off in a busy intersection. Normally, this is not a problem, but take it for a test drive when there's not so much traffic around and see how it behaves. If it seems iffy in some way, take it to a local bike shop to get it tuned up. That's a fraction of the cost of a new bike, and will often make it feel like a new bike!

As a pedestrian, you can sort of get away with thinking of yourself as an observer of traffic. In or on a vehicle, like a bicycle, you absolutely are part of the traffic and you have to act the part.

You must learn and employ the rules of the road.

You are a vehicle.

If you have a driver's license, just pretend you're a squishy car on two wheels. If you have never taken a driver's test, this part might actually be tricky. You have to figure out when you have right of way, when you should yield, which side of the road you should ride on, how traffic lights work, what is expected of you in a roundabout or when you arrive at a four-way stop, and so on.

Because however good the bicycle paths are in your community, you will eventually have to mix with cars, and this is dangerous. It's dangerous because cars are stupendously dangerous, but if you know which rules they're supposed to drive by and which rules they expect you to ride by, it becomes much safer.

So safe, in fact, that riding a bicycle lets you live longer than not doing it. Even if you ride in traffic. Even if you don't wear a helmet! (But please do wear a helmet for an additional +1. I'm just saying it's better to cycle without a helmet than not cycle at all, if you're that sensitive about your hairstyle.)

While we're speaking about safety, there are a few other small tips that are worth mentioning. If you already have a helmet but it's old, get a new one. I'm not quite sure why they say you should get a new helmet every x years (with x being a different number each time) but better safe than sorry, right?

Get lights for your bike. A white one in front and a red one in the back. It's going to help bring you to the attention of tired car drivers.

Check with local laws what the requirements are for bikes to be ridden on public roads. For example, in my jurisdiction, bikes are required to have bells. Stuff like that can be useful to know.

Do not ride close to parked cars. Leave room for at least one car door between you and a parked car. You learn this when you get a driver's license, but it's so much more important on a bicycle. If you drive your car into someone's car door, the door will break. If you cycle into someone's car door, you will absolutely break at least in a couple of places. And people will open their car doors in front of you when you come at high speeds toward them.

If there's junk on the ground, ride carefully. If there's a wire or hose lying across the street, carefully ride over it as perpendicular as you can. Those things are surprisingly good at making you eat shit. They're designed to be protected from cars passing them – they're not designed to make it easy to pass them with any other vehicle.

So you have a bicycle, you have a helmet, you know the traffic laws and you're ready to take on the world.

Maybe not so fast.

It's a really good idea to learn basic bicycle maintenance before you set off. It's going to make your ride much less frustrating and prolong the life of your bicycle.

You will eventually get a flat tire when you're on your way to work. What do you do? Of course, you bring out your spare tube and replace the flat one, then keep on going. So it might be a good idea to have done that at least once before.

Maybe your chain jumps off when you try to shift gears at some point. That's scary. Now you have a great bicycle but no way to power it. So what do you do? You reset the chain, of course. When you get home later that day, you adjust your derailleurs (the metal bits doing the actual shifting) so the chain can't jump off again.

You've been out in heavy rain and you hit some mud. Your drivetrain is dirty when you get home. How do you clean it? The drivetrain is one of the more expensive consumables on a bike, and cleaning makes it last for many more miles than it otherwise would.

It's a good idea to have a basic idea of how to do this stuff, because you won't always be close to your local bike shop when it happens. 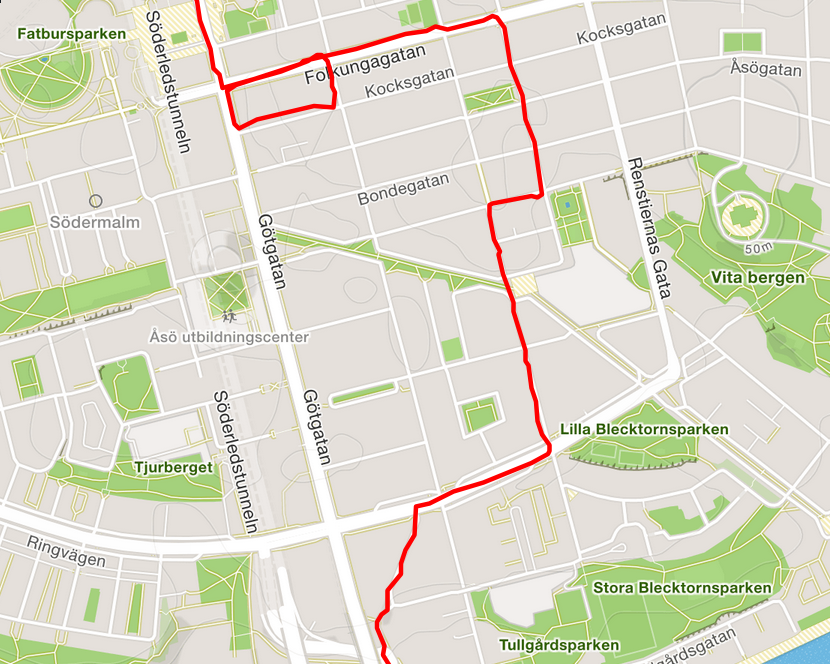 What happens when you don't plan your route.

Oh, and you might not want to hop on your bike twice a day, every day. Depending on your level of fitness and how far away your work is, it might be a good idea to start with only two days a week. Or maybe cycle to work and drive home one day, then the next day you do the opposite.

Anything under 5 km (3 mi) you can do everyday right off the bat. If it's more than that, you may want to be careful.

Be prepared that if you choose to go out hard on your bike (which is the most fun way to ride it, in my opinion!) you will likely have to wash yourself at your destination, so make sure you include the time to do that in your calculations.

As you start out, give yourself some extra time to find a good route. The best route on the train or in the car might not be the best bicycle route. Watch out for one-way roads (which often apply to bicycles as well!) and read the road signs. Sometimes they signal important exceptions for bicycles, sometimes they don't.

But be prepared for shitty bicycle roads. The entire place was designed with cars and pedestrians in mind, and bicycles tend to come as an afterthought. Us cyclists tend to be squeezed in wherever there was some room left, and not where it makes sense for us to be. This is frustrating for everyone in traffic, because it is one of the things that causes cyclists to ride with cars. They got the nice, logical roads.

There are some easy things you can do if you're the kind who wish you could increase your speed or just ride the same speed with less effort.

The Strava speed curve from a section of my morning commute with six red lights. I managed to optimise my speed such that I never had to stop completely. (The peak was an "amber gamble" – not a practise I'm proud of, but that specific light has a really long red period.)

Among all this, don't forget to also have fun!

You deserve to do yourself a service!